“Warlow sings like an angel and a demon, to rapturous applause, powering through a dramatic descent into obsession and madness.”

“Minimal but effective set, direction, choreography and lightning frame the stage action with poise, distracting the eye without resorting to needless stage business, making this staged concert as close to a full-dress production of the musical as we’re likely to see for a while.”

“This 25th Anniversary Concert of Jekyll & Hyde was an absolutely incredible evening, rich in talent and class and joyous in its celebration of a wonderful show.”

“Those who filled Hamer Hall were genuinely privy to something quite extraordinary and absolutely worthy of all the promotional superlatives.”

“Sharing the stage in both larger and ensemble roles was an utterly flawless company.”

“Captivating, powerful and heartfelt with her perfectly controlled vocal, Jemma was simply outstanding.”

“Anthony Warlow showed an intense devotion to the role, and his ability to deliver songs was electrifying.”

“Victoria Horne’s sumptuous costumes and Jasmine Rizk’s striking lighting design were noteworthy in creating the Victorian world of Jekyll & Hyde. Chris Parker’s direction, working within the limits of the concert format, had the singers constantly in motion, adding a twist of inevitability to the descent into murderous violence as the show unfolded.”

“Anthony Warlow brings his talent to the stage managing to fit seamlessly between the two characters. He manages to transform his voice and body to portray the villain with convincing and terrifying vigour.”

“Vanessa Scammell should be commended on her ability to reflect and embody the mood of every scene. The music brings a rare energy and elegance to the show tying the scenes together and accentuating the moments of tragedy, humour and tension.”

“Elegant, disturbing and compelling, Jekyll & Hyde is an absolutely unmissable recreation of the classic tale, and a truly unforgettable exposition of Australia’s talent.”

“Chris Parker’s direction sees the show acted to the equivalent extent of a fully staged production.”

“Maestro Vanessa Scammell again illustrates her flair for musical theatre, her meticulous work allowing the score to be heard at its very best. Orchestral music is rich and lush, and vocal harmonies are expertly realised.”

“(Jemma) Rix takes her status to the next level with a stunning performance.”

“Warlow is magnificent. Warlow retains all the thrilling edge that makes the music soar.”

“The high quality of a concert musical staging such as this one for Jekyll & Hyde gives a welcome ray of hope for the future.”

“Anthony Warlow is wonderful as Jekyll/Hyde as he gives a textured performance.”

“Jemma Rix is fabulous. Her pure solid vocals are captivating.”

“Opera heavyweight Peter Coleman-Wright gives the necessary gravity to the role with his rich deep vocals.”

“Warlow is still singing with beauty and theatrical insight, differentiating the two roles exceptionally well. Twenty-five years since recording the album, his singing is still very beautiful and expressive. His English accent and diction are both impeccable, his acting is richly detailed, and the way he darkens the voice as Hyde is positively scary.”

“It was a momentous night, at the end of which everyone leapt to their feet for a rousing standing ovation.”

“Jasmine Rizk’s lighting design adds plenty of atmosphere and is brilliantly used in the Confrontation number.”

“Jemma Rix is sublime as Lucy. She sings radiantly, her voice shining with creamy luscious tones.”

“Opera baritone Peter Coleman-Wright is exceptional, conveying just the right level of gravitas, authority and concern for his daughter.” 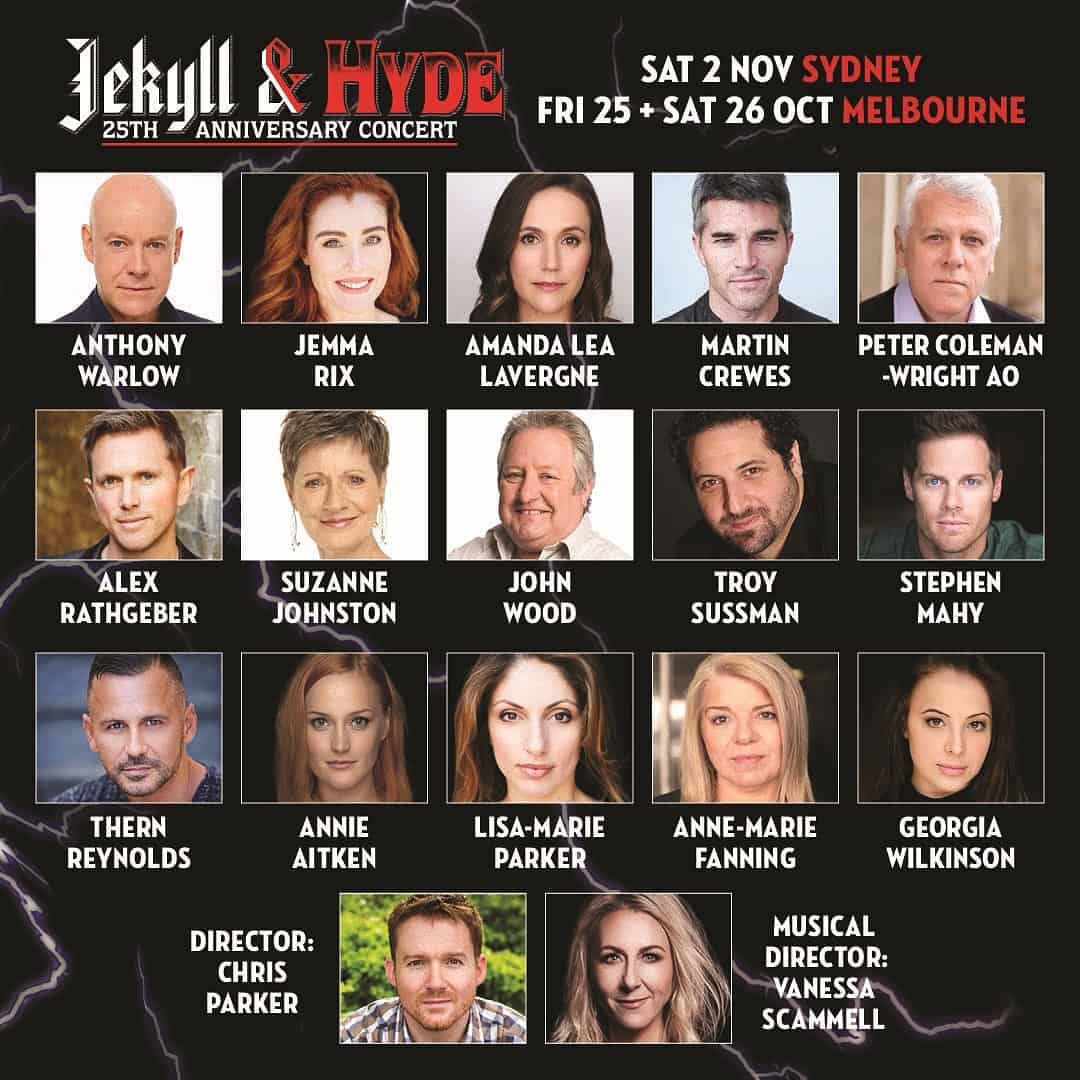